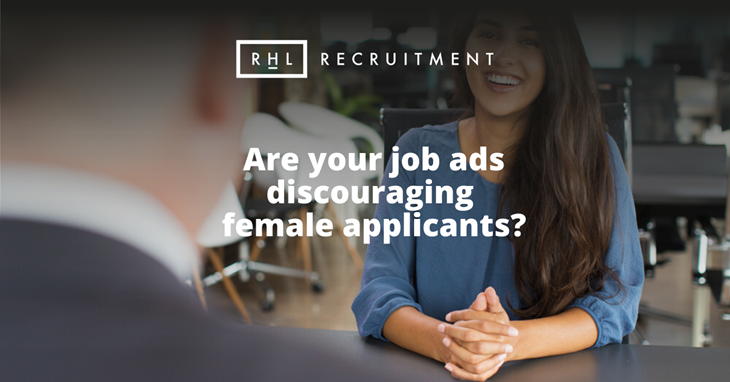 Words count, and particularly in job adverts where candidates often make split-second decisions on whether or not to apply for the role you’ve advertised.

If you operate in a traditionally male-dominated sector like engineering and are trying to recruit more women to your team, it figures that the words and phrases you use are crucial.

Given the Equality Act 2010, you’ll know not to use terms that discriminate against people because of their sex, age, race, sexual orientation, religion or belief or because they have a disability..

And as we know at RHL where we find the best talent for technical professional roles, smart companies are paying attention to the Advertising Standards Authority ban of adverts featuring ‘harmful gender stereotypes’.

But are you unintentionally using other words and phrases normally associated with certain genders, and employing unconscious stereotypes?

Words can subtly signal who belongs and who doesn’t belong in a role, and the fact is that job adverts that use masculine wording are less appealing to women because of that.

Here’s proof: Research by Harvard Kennedy School suggested that job ads that used more ‘masculine wording’ were perceived by women to be less appealing than the same ads that used more ‘feminine wording’. Women were also less likely to feel they would belong in that position or in that company as it seemed that more men worked there - even if they knew they could actually do the job.

Swap ‘manage’ for something else

You’ll expect your ideal candidate to be able to ‘manage’ a team, but could there actually be problems with that word? When one augmented writing software company analysed hundreds of millions of job ads, it found that the word ‘manage’ encouraged more men than women to apply for the role.

Apparently the word ‘develop’ or ‘develop a team’ could appeal more to female candidates, so consider whether it’s time to experiment with a slight tweak.

Who hasn’t spotted the word ‘ninja’ in a job advert? There’s been a real trend - particularly in the IT sector. But not only are buzzwords like this confusing as they don’t give a clear picture of the role, they present another risk.

The word conjures up images of a highly-skilled warrior - and that’s traditionally associated with masculine aggression. Some experts believe that potential female applicants could take this word as a subtle signal that they won’t belong in the company culture.

There are other words that could put off female applicants - even ones that might seem completely run of the mill in recruitment. But when it comes to attracting employees to your team, could these traditionally masculine words be putting certain applicants off without you realising?

Think about small changes to make your job adverts more inclusive. These words tend to be more gender-neutral:

Going beyond the language

Surely top talent is able to see through any words or phrases they don’t like if they’re focused on progressing in their career?

You might think so. But given the skills shortages in many of the sectors we recruit for at RHL, including engineering, automotive and the built environment, businesses need to appeal to the whole talent pool - not just one section.

So is it worth missing out on some star team members just because of the language you use in your job adverts?